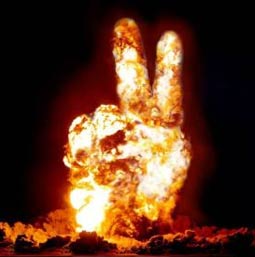 Nuclear weapons have been in the news a lot in recent weeks, but one story that has flown under the radar is the nearly trillion-dollar weapons upgrade to the U.S. nuclear arsenal. This “modernization” has been proposed not by the hawkish Republicans of the House and Senate, but by Nobel-Peace-Prize-winning president Barack Obama.

The funding and carrying-out of the upgrade will not happen in one fell swoop. It is a process scheduled to take place over the next three decades, as the U.S. aims to convert its aging Cold War stockpile into a modern 21st century nuclear force. Nevertheless, the nearly trillion dollar price tag is a concerning one, especially for those of us already frustrated with the amount of money our government currently spends every year protecting our “freedom” and promoting “democracy” in the world.

The U.S. spends more on defense than any other country, and it’s not even close. In fact, in 2014, the U.S. spent more money on defense than the next seven highest spenders combined. Yes, that means that if you add up the total defense spending of China, Russia, Saudi Arabia, France, the UK, India, and Germany, it still falls $9 billion short of the guns, bombs, planes, and tanks built and bought by the U.S.

Domestically, this adds up to 18% of total spending, that is, if you solely focus on mandatory spending. If you focus on discretionary spending, which more truly reflects how our government spends its money, the total rises to 57%. That means that the United States spends nearly 33% more dollars on its military than it spends on EVERYTHING ELSE.

But we are talking about nuclear weapons here, an area that even with a trillion dollar increase will not exceed 5% of total U.S. defense spending in the coming decades. And perhaps this is what is most concerning of all: the fact that even as we dump another trillion dollars into a weapons system whose only function is massive annihilation of humanity, it will barely manage to register a blip on the defensive-spending radar.

It is also important to note the political and historic backdrop in which this proposed upgrade is taking place. The United States along with several other nations just put the finishing touches on what’s being heralded as a historic “peace” deal with Iran, a deal that aims to prevent Iran from even having the technological capability to develop a nuclear weapon. Nevertheless, most Congressional Republicans, and even some Democrats, still view the agreement as far too weak, and want to see language that cripples and controls Iran even further. I wonder what Iranians think about the U.S.’s expansion of it’s own already gigantic nuclear weapons program while simultaneously limiting the comparatively tiny program of Iran, a program that explicitly has never had a motive other than energy production?

Of course, the fear is that should Iran have the ability to develop such a weapon, the crazy, Islamic bastards would probably use the bomb to rain fire on all their sworn enemies. However, if history were to have its say, which it should, it would tell us that if anyone were crazy enough to use such a devastating weapon, it would most likely be the only country that has ever used it before. Of course that country is the United States of America, a nation who exactly 70 years ago last week, dropped two atomic bombs on the country of Japan killing more than 200,000 people (the vast majority of whom were civilians.)

Mixed international signals aside, the spending part of this issue is a domestic one, and while a trillion dollars is a lot of money, the fact that it fails to make up even 5% of total military spending has left lawmakers searching for other options when seeking to cut costs. This is a stupid way to think.

A trillion dollars is a trillion dollars no matter what percent it is of a whole. Maybe a few cuts here and there won’t make much of a difference in the overall numbers, but that won’t lessen the impact it could have for the communities whose families it could feed, whose sick it could heal, and for whose roads and schools it could build.

Furthermore, the idea that we need to further invest in the modernization of a program in which the only scenario where those dollars come to fruition is a nuclear war that severely compromises the ability of humans to even exist on this planet is completely and totally idiotic. Any competitive edge the United States is gaining in such a scenario is a million times mitigated by the devastating effect such a war would have on human life.

So fuck bombs. Let’s put those dollars towards people. Let’s make a real statement that we are committed to international peace and not upgrade but dismantle our nuclear weapons arsenal. Let’s show Iran that we mean business. Let’s show Japan that we are sorry. A trillion dollars worth of nuclear bombs is a trillion dollars wasted, no matter what kind of deterrent it may or may not provide. And if that deterrent is really that necessary, if the only thing that is preventing us all from blowing each other up is the fact that we might get blown up too, well then I don’t want to live in that kind of world anyway.

2 thoughts on “Nuts Over Nukes”