Black Lives Matter (BLM) is at it again in Minnesota. This Sunday, prior to the Minnesota Vikings first home game of the season, BLM will be holding a rally they are calling #BlackRail to protest police brutality against the Black community, and more specifically to protest the beating delivered last month to 17-year-old Marcus Abrahams during a confrontation with Metro Transit Police near the fairgrounds where he had been working.

People are pissed, not so much about the beating, but of the audacity of the BLM movement to interrupt yet another hallowed event on the Minnesota calendar. Looking at the #BlackRail twitter feed, it is clear that this protest has inspired the same vehement opposition inspired by their protests of the past, and has evoked the same types of comments that, while objecting to these protests, simultaneously demonstrate the very need for their necessity. Comments that express the need for these protesters to find jobs. Comments that label these protesters and the victims that they stand up for as criminals or thugs. Comments with the hashtag #AllLivesMatter. Comments that prove that racism is still a huge problem in this country today, and that the conversations that groups like BLM are trying to start are conversations that desperately need to happen.

But not everyone who opposes these protests is an espouser of racist rhetoric. Some people are just annoyed, annoyed by the fact that their day is being interrupted for a problem to which they themselves do not contribute. They are just minding their own business. They are just going about their day.

This has been the case with every major Minnesota protest put on my BLM. The Mall of America protests bothered people just trying to do their Christmas shopping. The State Fair protests bothered people just trying to enjoy a corn dog. But you know what’s worse than long lines at the mall and cold corn dogs? Dying. And I think this is what many of the frustrated often forget.

I also think that those who write-off BLM as a nuisance are forgetting their history. Movements and moments that we celebrate today pissed off a ton of people in their time. Look at the Civil Rights Movement. The freedom riders complicated the days of people just trying to get to work. Those that sat in on segregated counters disturbed people just trying to enjoy their lunch breaks. And the March on Washington probably interrupted the vacations of families who had saved and planned for that vacation for months and years. Yet it is those tactics that made the movement successful, not just in pissing people off, but helping people to see the light.

That success did not come easy. Challenging the status quo is hard work, especially with so many people living comfortably within it. Pissed off people rose up then against the Civil Rights Movement just like pissed off people are rising up now against BLM. But those people of 50 years ago are not remembered very kindly. They are the people in your history textbook holding the signs that say, “Race Mixing is Communism,” “White Power,” and “Who Needs Niggers.” They are the people who stood against the tide of progress. 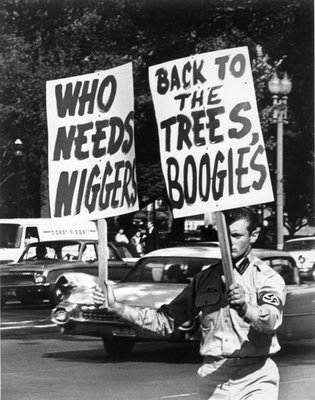 Which raises the question, how will those who stand against the goals advocated for by groups like Black Lives Matter be judged by history? 50 years from now, after the tide of progress (hopefully) has washed away much of the racial injustice and systemic racism that exists today, how will those people be remembered? I don’t think it is going out on a limb to say, “Not well.”

I’m not trying to compare yesterday’s racism to today’s. Thankfully, in most of the United States, such direct and honest racism is considered unacceptable. Today’s battle is more against the subtle stuff, the systems and sayings that don’t explicitly advocate for racist goals, but nevertheless achieve racist results. These are the battles that Black Lives Matter are fighting.

So next time that even the thought of a Black Lives Matter protest inconveniencing your day enters your mind, and you feel that frustration and anger starting to creep in, pause, and think big picture. Think about the march of history, where we’ve been, and where we’re hopefully going. Think about who’s helping us get there, and who’s standing in the way? Who’s rolling with the tide, and who’s pushing back against it? And then take a deep breath, and relax. Realize that even if Black Lives Matter is making some people’s day suck a little bit, their cause is a worthwhile one, because they are fighting for people who have it a lot worse. And whatever you do, don’t get pissed off, because even though mall patrons, and fair-goers, and Vikes fans are not the people gunning down unarmed Black men in the street, their annoyance with Black Lives Matter’s persistence to advocate for justice is still problematic.