I am a vehement supporter of the group Black Lives Matter. Some people mistake this to mean that I support everything that every member of every chapter of Black Lives Matter says and does—that I have some explaining to do every time a Black Lives Matter member makes an outlandish remark or chucks a bottle into a crowd of police.  Not so. What it means is that I support the movement’s overarching cause, the termination of an injustice that I believe to be real—the discrepancy between the value that we as a society place on white lives and the value that we place on black ones.

But as much as I support their cause, I have found myself becoming increasingly frustrated with some of the methods the movement has chosen to achieve its goals, particularly in my hometown of Minneapolis as it relates to the shooting death of Jamar Clark. I’m certainly not alone in this sentiment, but while most peoples’ frustrations stem from the types of protests the Minneapolis chapter of BLM has been conducting—from blocking traffic on 94 to camping-out outside the precinct—my own personal frustration has less to do with their choice of protest and more to do with the narrative they have built those protests on.

I don’t necessarily have a problem with the highway shutdown. It wouldn’t be the first tactic that I would choose from the long list of non-violent resistance methods, but I think that interrupting privilege and forcing people to pay attention is an important component to the BLM gameplan. And while I’ve heard several legitimate criticisms of this tactic, such as the hypothetical ambulance on its way to or from an emergency, I think this criticism is also somewhat illustrative of the essential claim to the Black Lives Matter cause, as it places more importance on the life of that hypothetical victim in the hypothetical ambulance than the life of the victim who was, in reality, already killed.

I also don’t have a problem with the precinct camp-out. If an institution is a purveyor of injustice, then that institution deserves to be a target of the protests fighting to eliminate those injustices, even if many of that institution’s members are providing the admirable and essential societal services that most police officers do indeed provide.

Where I do have a problem with #Justice4Jamar is that both of these protests have been based on a version of the Jamar Clark story that, in all likelihood, is not entirely true. Black Lives Matter Minneapolis has gone all-in on an improbable counter-narrative that, in the long-run, will greatly reduce its credibility, as well as its ability to gain widespread support.

In the BLM narrative, Jamar Clark is an innocent victim, facedown on the ground, handcuffed and helpless, when he is shot in the head by Minneapolis Police. The last part of this narrative has been confirmed to be true. However, other evidence suggests that the rest of the narrative is not. It suggests instead that Jamar was not innocent nor handcuffed nor helpless. That he was violent towards his girlfriend, violent towards the police and paramedics attempting to provide her treatment, and that it was his own actions, his own reaching for the weapon holstered on the belt of one of the officers at the scene, that ultimately led to that officer using the weapon against him.

Right now, we don’t really know. We have our own versions of the story in our heads—what we believe, what we don’t—but as the investigation continues, the larger truth still evades us. Even when that “truth” comes outs, when the official version of the story has been released, it will still likely be comprised of incomplete and contradictory evidence. And no matter what the official version of that story says, I understand why people, specifically those associated with Black Lives Matter, will still be skeptical of the version produced by the very institution they are protesting.

But what I’m fairly certain about is that, upon its release, this official version will put to rest many of the claims that Black Lives Matter Minneapolis has been purporting about Jamar Clark’s death, claims that have played an integral role in the controversial protests that the movement has been conducting.

In a way, we’ve seen this movie before. It played out one year ago in the town of Ferguson, Missouri, when unarmed black teenager Michael Brown was shot and killed at the hands of Ferguson police officer Darren Wilson. Much like the Jamar Clark case, the immediate details were murky. We knew the end of the story, but we didn’t know how we got there. Many narratives were created to fill in the blanks, but the narrative adopted by the newly created Black Lives Matter movement, and the nation as a whole, was the narrative of “Hands up, Don’t shoot.”

In this narrative, Michael Brown and a friend were walking down the street when they were stopped by police officer Darren Wilson. Wilson noted that Brown matched the description for a convenience store theft, and tried to question Brown on the matter. An altercation occurred. Brown took off running. Wilson gave chase. Realizing that his attempts at escape were futile, Brown stopped, raised his hands in the air, and prepared to give himself up. Wilson then shot Brown six times, killing him on the spot.

It is easy to see how this story inspired a national outrage. “Hands up, Don’t shoot,” chants rang out in marches and rallies across the country, even making appearances in rap concerts and NFL games. The problem with the chant is that it wasn’t exactly true. 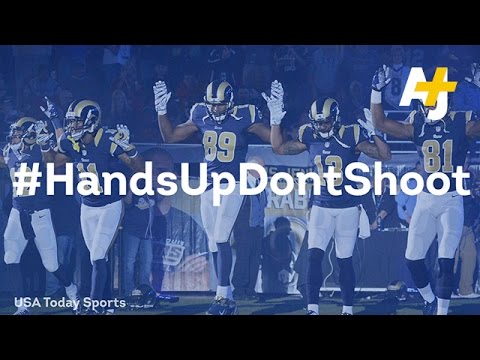 According to multiple eyewitness accounts, Brown did not have his hands up. Instead he was aggressively charging at officer Wilson when the six fatal shots were fired that ultimately took his life. Furthermore, prior to the shooting, Brown robbed a convenience store, assaulted an officer, and tried to grab an officer’s weapon. In other words, “Hands up, Don’t shoot” was more than misleading, it was a lie.

I suspect that #Justice4Jamar may be heading in the same direction—that the shutdowns and sit-ins and marches that have been conducted in Jamar’s name, will ultimately have been built on a narrative that inaccurately reflects the final moments of his life. I also suspect that once this narrative has been discredited, the Minneapolis chapter of Black Lives Matter will be discredited as well, just as it was in Ferguson.

While “Hands up, Don’t shoot” and #Justice4Jamar have succeeded in bringing much needed attention to the Black Lives Matter mission, not all press is good press, and when the Jamar Clark headlines are turned on their heads just like they were in the Michael Brown case, that publicity will only be used to discredit the movement on a larger scale. 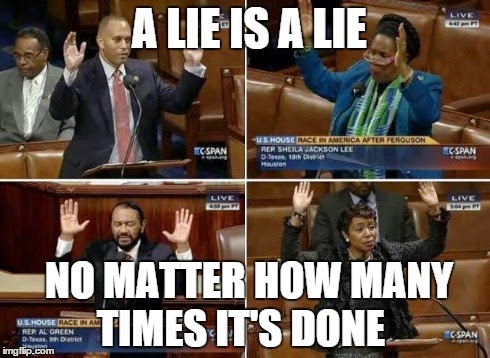 This is the last thing that Black Lives Matter needs. There are already enough people out there who deny the existence of systemic racism, who don’t understand the inherent ignorance in #AllLivesMatter, and who continually cite black-on-black crime as the reason that the Black Lives Matter movement is bullshit.  How is the movement supposed to challenge these falsities, much less win these people over, if it completely destroys its own credibility?

The ironic part is that the unembellished narratives of both the Michael Brown and Jamar Clark cases have aspects that maybe should be a part of the injustices that Black Lives Matter is trying to combat. Brown and Clark may not have been saints or martyrs, but they are still two unarmed men who did not deserve to be shot in the head. If these narratives were used correctly, if these narratives were used truthfully, they could provide powerful support to the larger battles Black Lives Matter is fighting against the excessive use of police force and the targeting of black bodies. But once these narratives have been corrupted with even the slightest hint of dishonesty or disingenuity, it discredits the whole narrative, and becomes ammunition for the opposition.

So please Black Lives Matter, don’t make the narrative of #Justice4Jamar more than it is. The fact that another unarmed black man was killed by a police officer is significant enough. If it comes out that Jamar was indeed handcuffed, then yes, by all means, go fucking nuts—shut down highways, occupy precincts, rally, march, and boycott…But until we know for sure,  don’t treat that narrative as truth. Continue to demand the truth, but don’t create your own version of it. Because if you create your own version of the truth, and that version turns out to be anything less than truthful, you will lose the support of a lot people. And that’s a shame, because the support of a lot of people is exactly what the Black Lives Matter movement deserves and needs.