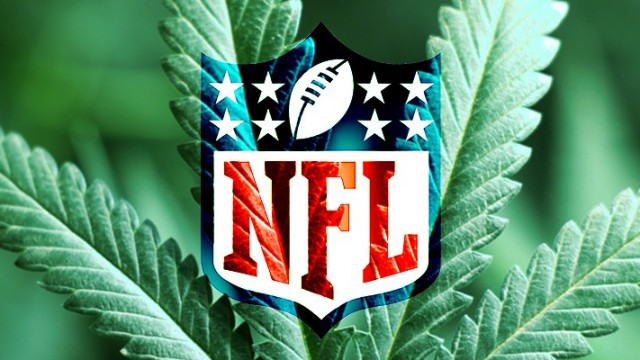 The NFL has become tougher to watch in recent years. This is not due to the product on the field, which is as spectacular as ever, but the knowledge that we are gaining about the consequences of all the head-banging, bone-crushing hits that go into making that product.

Our knowledge of the immense damage to the bodies and minds of many of our helmeted heroes saps some of the fun out of watching the game, even though it is partly our innate savage bloodlust that makes that game so fun to watch in the first place. But while problems like concussions are a total Sunday morning buzz kill, our increased awareness of such maladies has also led to an increased initiative to address them. As a result of this exposure, the NFL has made sensible in-game rule changes to protect players, increased its support system for those who have left the game, and contributed to research that could have positive, life-changing impacts for all people who suffer from brain-related injuries.

Which is why the recent three-pronged proposal by Baltimore Ravens offensive lineman, Eugene Monroe, is such a no-brainer: 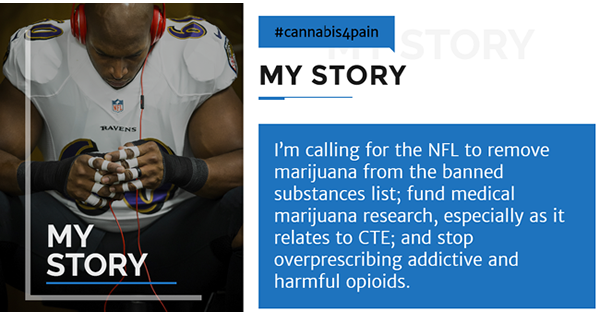 Surprisingly, this statement made Eugene Monroe the first active player in NFL history to openly advocate for the use of marijuana to treat chronic pain and sports related injuries. However, as reasonable as his proposition may seem, early signs point to a staunch resistance.

By all accounts, the NFL already has a fairly lenient, look-the-other-way approach in regards to marijuana use by players. Most players are only tested one time per year, and they are usually quite aware of where and when that test will be. Once players have tested clean, they are unofficially free to participate in clandestine cannabis use all season and off-season long until the next training camp test rolls around.

However, this should not be misconstrued to mean that the NFL is a progressive institution in regards to marijuana. Marijuana use is highly vilified in the NFL, despite the likelihood that over 50% of its players are regular users. Players who, albeit stupidly, fail their training camp tests, can get sucked into a system that is impossible to beat, where they may be subject to testing up to ten times per month. Players who are caught publicly have it even worse, acquiring a stigma that can have profound effects on their careers. Nobody knows this better than rookie Miami Dolphins offensive lineman, Laremy Tunsil, whose stock dropped drastically in the 2016 NFL draft when video surfaced of him ripping a bong through a gas mask just minutes before the draft began, a drop that could have cost him up to 8 million dollars.

And while the NFL is punishing marijuana users, it is also actively promoting the use of drugs that are far more dangerous: opioid-based painkillers. In his highly publicized essay, Monroe describes what he calls the “T Train,” a line that forms in his locker room prior to every game where players wait to receive their pregame shot of the powerful painkiller known as Toradol. While this drug is highly effective at making 60 minutes of professional football bearable, its effectiveness can be dangerous as it can often mask in-game injuries that really should be dealt with immediately. It is also highly addictive.

Abuse of prescription painkillers is nothing new to the NFL. Many people from my generation and my part of the country remember 20 years ago when our hero/arch-nemesis Brett Favre checked himself into rehab for the abuse of the painkiller vicodin. Painkiller abuse is nothing new in our country either, but it is on the rise. Everybody from Barack Obama to Macklemore is talking about the opioid epidemic which has led to a tripling of overdose deaths since the year 2000.

Which is why marijuana makes so much sense. Studies suggest that marijuana could be highly effective in providing relief for certain types of pain often associated with football without the accompaniment of the addictive properties possessed by prescription pain pills. What is more, some research even suggests that marijuana could possess some protective properties that may actually help to prevent the degeneration of the brain caused by concussions and other football related head injuries.

Unfortunately, the research on marijuana is pretty limited. Much of the evidence that is supportive of marijuana’s effectiveness is anecdotal as opposed to scientific, meaning that even though many current and former players “say” that marijuana has been beneficial to them in dealing with aching knees and throbbing skulls, there is insufficient scientific evidence to “prove” that what they are saying is true.

But this is what makes Monroe’s request so reasonable. Monroe is not calling for the NFL to replace the T Train with a locker room dispensary. He is simply asking the NFL to cease with its vilification of the drug, to remove it from the banned substances list on which it currently resides and treat it like the potentially revolutionary treatment that it could indeed be. He also wants research dollars that could add some scientific evidence to the immense body of anecdotal knowledge that already exist.

Marijuana might not work for everybody in every situation. While marijuana seems to provide plenty of post-game relief, nobody is suggesting a Sunday morning wake-and-bake to help reduce in-game injuries. Furthermore, it is important to note that marijuana use also has its dangers and downfalls, although they pale in comparison to those carried by prescription meds. As a current non-pot smoker who’s been high hundreds of times throughout his life, I think that I can safely state that, for me, the anxiety and paranoia that I personally experience from the use of marijuana outweighs many of the potential medicinal benefits. But who knows, maybe if I wreck my knees and back someday, I will change my tune.

If the NFL is serious about caring for its players, it will explore the use of marijuana as a potential alternative to more traditional pain treatment. It will fund marijuana research and help to provide the science that it says it needs in order to make any sweeping changes to official NFL policy. It will alter its cavalier attitude towards prescription pain pills, and double-down on its look-the-other-way approach as players continue to blaze up in private.

I’m not confident that the NFL will respond accordingly. Roger Goodell is a politician who, just like every major presidential candidate who threw their hat into this year’s election, won’t flip on marijuana until it is politically viable to do so. And that’s too bad. It would be nice to see the league that I love so much be ahead of the curve for once on something instead of awkwardly stumbling behind. But maybe nowadays, that’s just what progress looks like. #cannabis4pain