Imagine that one morning you are on your way to work when you walk by a shallow pond. In that pond you see a small child who is clearly drowning. You can easily save the child, but it will require that you get your clothes and shoes all wet and muddy. What is more, you are running behind schedule, and saving the child will surely make you late for work—perhaps quite late, as you will now need to go home and change your clothes. Do you still save the child?

Of course you do. You do it in a heartbeat. You do it without thinking. The thought of someone who would even stop to consider their shoes or schedule is itself disturbing, let alone the thought of someone that would willfully neglect to save the child for such selfish and petty reasons. That person would be considered a criminal, a sociopath, and a monster. But if you believe renowned ethicist Pete Singer, we may all have a little bit of monster in us.

Of course, the pond in this case is metaphorical. In reality, the children whose lives we could be saving are dying from things like malnutrition, malaria, and civil war. Still, in the case of many of those children, their lives really are savable. There are organizations that are working to provide healthy meals, medicine, and new homes in safe locations, and if those organizations were to receive more money—our money—those dollars would LITERALLY save real humans lives that will not be saved otherwise.

Just the other night I went out with some friends to the new Surly Brewery in Minneapolis. It’s a fantastic establishment—some of the best beer and Brussels sprouts in town. All in all, I spent about $40 there, tip included, and another $5 on Pokémon GO egg incubators to make all the walking to and fro a little more worthwhile. I had a really great time that night, but if I had passed that shallow pond on my walk to the brewery, would I have jumped in and saved that drowning child, knowing full well that the money in my pocket would surely be lost, that my iPhone would be irreparably damaged, and that my lovely night out at Surly would be effectively ruined? God, I hope so.

So what’s the difference when that struggling child is on the other side of the world, thousands of miles away, but just as easily savable? The obvious answer is “out of sight, out of mind,” but while that is certainly an explanation, it is hardly an excuse.

But these thoughts have been on my mind lately. They’ve been on my mind ever since I first encountered ethical philosopher and all-around great person Will MacAskill on Sam Harris’s Waking Up Podcast. On the podcast, MacAskill describes a movement that he calls “effective altruism.” The movement is based on two assumptions: 1) That most people living in the developed world can and should do more with their time and money to help those who are less fortunate, and 2) that there are more and less effective ways to accomplish that goal. In other words, the good that we do should be strategic. If I am going to donate $50, I should seek out an organization that will use that money effectively and impactfully. Likewise, if I wish to donate my time, there is a cost-benefit analysis that should underlie how I choose to spend it.

That latter part leads to some interesting considerations. For example, one might consider the donating of their Saturday to a charitable cause such as volunteering in a soup kitchen or a children’s hospital to be a greater act of altruism than, say, working eight hours of overtime and earning some extra dough on an upcoming paycheck. But in an “effective” sense, the time-and-a-half wage paid on those eight hours could probably do far more good if donated to the right cause than any one volunteer could do in a day of service. To put it another way, that day of service is not worth the opportunity cost of the money that one could make completing a different task that, in this case, is not itself altruistic. Using this philosophy, I have heard MacAskill argue that one of the most effectively altruistic career paths that one can pursue is actually banking and finance, assuming of course that the person is donating a large percentage of their lucrative earnings to help the world’s least fortunate people. 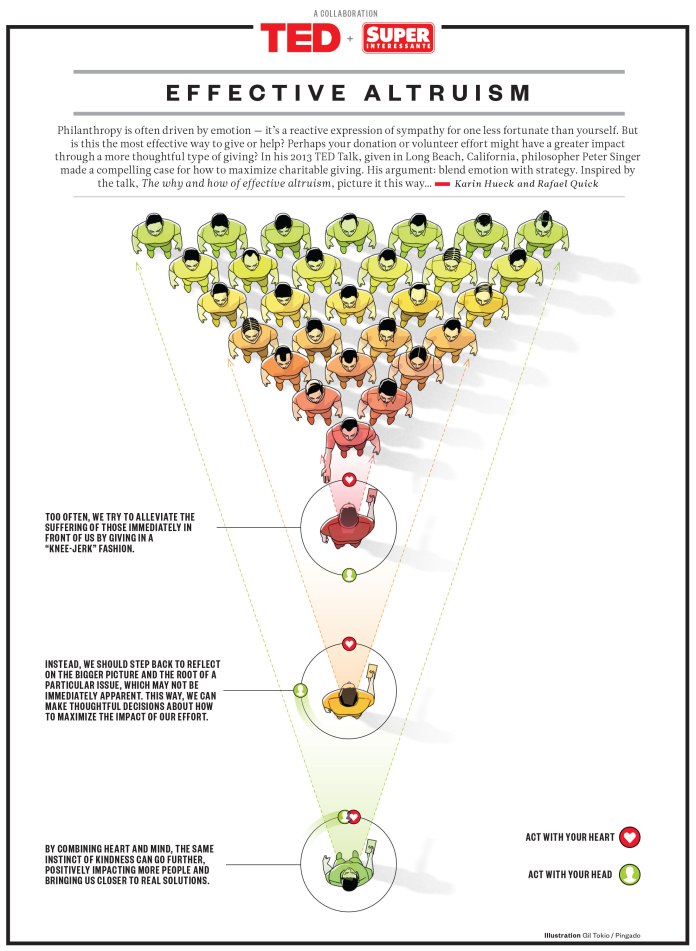 You can go pretty far down the rabbit hole with this philosophizing about how to best maximize every spare minute and dollar, but while I’d like to get to that point someday, I’m not ready to go there now. Where I am ready to go, and where I think “we” in the developed world might be collectively ready to go, is accepting assumption number one—accepting the argument that we can and should be doing more to help those who are less fortunate than we are and that we should start doing those things now.

There are plenty of excuses that rationalize the pushing off of this responsibility. I know them well because I make them myself. While giving can certainly be intrinsically gratifying, online donations don’t offer the same euphoric spike as diving in that shallow pond and holding that living, breathing child in your arms—living and breathing thanks to you. In that scenario, you can feel the difference that you are making, but that fulfillment is hard to mimic with a credit card, especially when you do not get to witness the impact of your action.

What is more, the difference that your dollars make is, in reality, pretty microscopic when compared to the massive amount of global suffering that tragically plagues our planet. Even if you were to use every spare dollar over the next calendar year to buy bed nets for people in the developing world, there is no doubt that thousands upon thousands of people would still die from mosquito-born illnesses over that time. However, while that truth is sobering, those dollars still would make a difference, and it would be an enormous difference to the real human beings whose lives those bed nets would be saving—real human beings whose lives would not have been saved otherwise.

Another excuse is the burnout factor. Many of us already feel that we are struggling to make ends meet in our own lives. We live paycheck to paycheck, are saddled with mortgages and car payments and student loan debt, and don’t feel that we have a whole lot leftover to give at the end any given pay cycle. This is a real concern considering that, in order to give, people need to be motivated, and if their lives suck, that motivation will be lacking. But while the leaders of the effective altruism movement certainly would not discourage an immediate and dramatic change in lifestyle if someone were up to it, that does not seem to be what they are advocating. Instead, they are encouraging people to dip their toes in the proverbial pool. They are asking us to begin considering our own consumption habits—what’s necessary, what’s not, and where we could sacrifice small comforts and luxuries in order to make someone else’s life a little less terrible. As we begin to adjust to this mode of thought, Singer suggests that we may actually want to dip further into the pool. As one person cited in a Singer Ted Talk put it, he doesn’t even feel that what he is doing is altruistic…He feels that the life he is saving is his own.

With the publication of this blog post, I will simultaneously be dipping my toes in the pool for the first time. I will be donating $20 to the Against Malaria Foundation, which “works to prevent the spread of malaria by distributing long-lasting, insecticide-treated mosquito nets to susceptible populations in developing countries.” This donation is hardly a sacrifice for me. It may cost me some Poké-progress or a bottle of tequila, but I can and should be doing more. Hopefully, in the future, I will work up the willpower to do that, but for now I’m going to allow myself the humble self-satisfaction of taking the first step. Below is a link to Peter Singer’s website, “The Life You Can Save.” This site allows you to identify credible, impactful organizations that will help your dollars to do the most amount of good possible in areas of your choosing, be it children, women and girls, hunger and nutrition, or education. Click around, check stuff out, and if you want to dip your toes in the pool too, consider this your invitation to do so. The water’s warm. 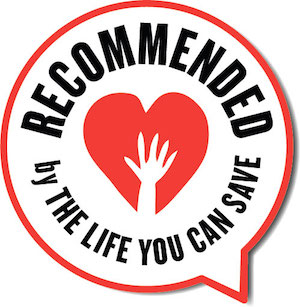