Social justice-centered censorship is sweeping the nation, and this past week, Minneapolis became the temporary epicenter.  The controversy stems from a piece of art that was set to debut at the grand reopening of the Walker Art Center Sculpture Garden later this month.  The piece known as Scaffold is intended to represent a commentary on the use and abuse of capital punishment throughout the history of the United States.  Part of that commentary includes a reconstruction of the gallows used in Mankato, Minnesota, during the 1862 hanging of the Dakota 38—the largest mass execution in U.S. history. 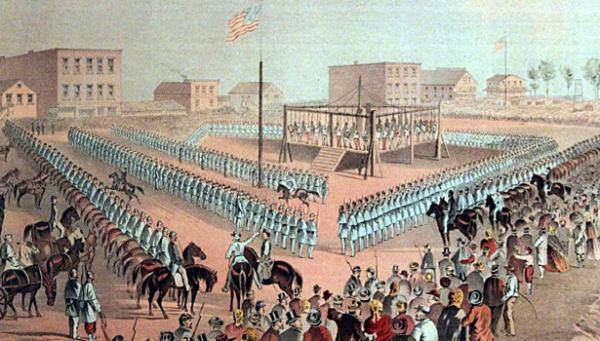 The Scaffold structure has been met with massive resistance from both Native and non-Native peoples alike. That resistance came to a dramatic culmination on Wednesday afternoon with the joint decision to dismantle and burn the structure in a ceremony led by Dakota Spiritual Leaders and Elders. But while Scaffold’s run has ended before it ever really began, the conversation that is taking place in the Twin Cities and around the country is just getting started, and I personally am still trying to figure out where on these issues I stand.

Although artist Sam Durant intended Scaffold to be an awareness generating piece about the historic plight of Native populations, I understand the concerns about the unintended messages that the piece may also convey.  Chief amongst these is the structure’s location in the Walker Sculpture Garden—a less than solemn place with frolicking couples and children, mini golf, and a giant rooster and a cherry.  As one write-up puts it, “context matters,” and the context of the Walker Sculpture Garden may contribute to the trivialization of one of our State’s gravest injustices.

Another concern is the neglect of Native voices in the retelling of a story that is particularly impactful to indigenous people in this part of the country.  Sam Durant is a white guy from L.A., and while he has collaborated with Native groups in the past, this project was completed without any attempts at outreach to the Dakota peoples who the project is about. What is more, while in negotiations to obtain Scaffold, the Walker Art Center never reached out to Dakota groups in the community, which in hindsight, should have been a no-brainer considering the gruesome nature of the project and its intimate ties to that tribe’s history. 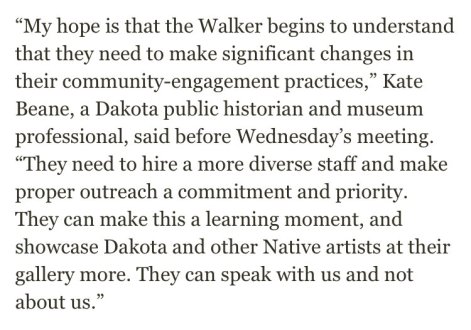 But all that said, I also understand a lot of the resistance to the resistance of the soon-to-be-burned structure.  Scaffold is a lot of things, but I don’t think it’s an example of genocide opportunism. A reading of Sam Durant’s near instant apology can quickly punch holes in that accusation.  The project’s actual intention was “to speak against the continued marginalization of these stories and people, and to build awareness around their significance.”  Misguided methods? Perhaps. But after reading the letter in full, Durant hardly seems like the kind of a guy seeking to exploit tragedy for personal gain.  Even the highly criticized “jungle gym” component of the project stems from a thoughtful albeit questionable attempt to comment on the school-to-prison pipeline phenomenon so prevalent in communities of color today.

I also have to say that I got some respect for a fellow white guy doing his darndest to challenge oppression and privilege in the world, especially when he doesn’t have to.  As a member of the most dominant group in almost every major demographic category, guys like Durant don’t need to tackle injustice, because on a systemic level, they probably don’t often face it.  I’m not trying to paint Durant as a hero, and that kind of observation may sound tone deaf considering the gravity of the issue at hand, but that doesn’t make it any less true.  Perhaps it’s also that ignorance to experienced oppression that leads to the blundering nature in which guys like Durant (and myself) try to address said oppression, no matter how pure his (my) intentions might be.  But while it’s not always the thought that counts, the thought still counts for something, and what Durant is doing is exactly what us white guys are supposed to do in fighting oppression and dismantling our own privilege—starting conversations in our communities, with our people, and trying to create change. 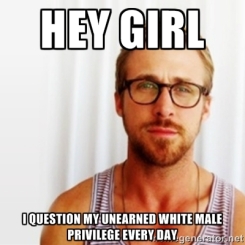 Cultural appropriation is often a term that gets tossed around to describe artists like Durant who try to tell stories that aren’t theirs to tell. But while misappropriation is certainly a thing, and perhaps applicable here, there also seems to have been a societal shift in what we define as tasteless or insensitive appropriation of someone else’s culture. Bob Dylan sang songs about both Emmett Till and Rubin Carter in the 60s and 70s, and I’ve yet to find an article that condemns him as a “racism opportunist.” On the contrary, Dylan is constantly recognized as an American civil rights hero who used his art to draw attention to repressed and silenced voices, even if the experiences of those voices were a far cry from his own. 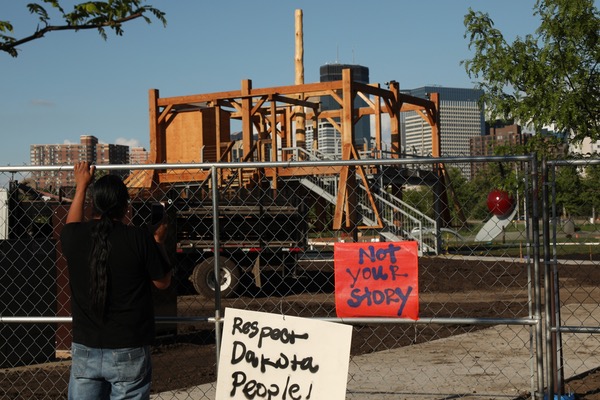 Sam Durant is no Bob Dylan. Even if he thought that he was, he knows differently now:

“I made Scaffold as a learning space for people like me, white people who have not suffered the effects of a white supremacist society and who may not consciously know that it exists …However, your protests have shown me that I made a grave miscalculation in how my work can be received by those in a particular community. In focusing on my position as a white artist making work for that audience I failed to understand what the inclusion of the Dakota 38 in the sculpture could mean for Dakota people.”

Hopefully Durant has learned from this experience as much as his statement seems to suggest.  Hopefully he remains encouraged, and continues to try use his position of power and influence to do good in the world. If there is any solace he can take from this catastrophe, it’s that his project still accomplished its intended goal—it started a conversation. It’s not exactly the conversation that he intended, but it’s an important conversation nonetheless, and no matter what side of the issue you’re on, or what your ethnic background is, or what your beliefs are regarding the myriad of –isms at play, there is understanding to be gained for those willing to listen and learn, especially considering the fact that no one in this conversation seems to disagree that injustice is something that we need to address.  If nothing else, Sam, thanks for that.

Recommended viewing to learn about the Dakota 38: