Americans are no strangers to sacrifice.  We make sacrifices in our personal lives all the time—for friends, for family, for work—putting aside personal desires and ambitions in order to support the other people that frequent our existence.  We’ll surely be making many of those sacrifices in the weeks and months ahead, as we struggle to adjust to the life-altering circumstances imposed by the coronavirus pandemic.  But in addition to the personal sacrifices, there lies an opportunity, and perhaps a necessity, for our country to reacquaint itself with a type of sacrifice that we may have grown distant from—a larger, more collective sacrifice for the greater, national good.

There are periods in our country’s history when a sense of national sacrifice was much more salient.  During the Second World War, Americans in every community showed up to support the “war effort”.  They planted victory gardens, and limited their consumption of meat, dairy, and gasoline.  They turned out their lights early, and collected and donated resources like rubber and aluminum.  They spent billions of dollars on government war bonds.  And while some of this sacrifice was a result of government mandate, most accounts suggest that an overwhelming majority of Americans supported the war effort not because they had to, but because they wanted to.  President Franklin Delano Roosevelt appealed to a national sense of collective sacrifice, and Americans willingly answered his call, becoming a vital component of the American military victory abroad. 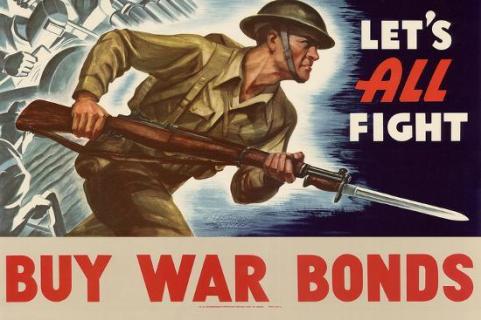 Another president made a similar appeal a few decades later. John F. Kennedy ascended to the presidency during the formative years of the Cold War—a time when every aspect of American life seemed to be under imminent threat.  In his inaugural address, Kennedy famously challenged his fellow Americans to, “ask not what your country can do for you—ask what you can do for your country.”  This call to duty inspired a generation of Americans to seek careers in public service as teachers and soldiers and government officials, hoping to contribute to something larger than themselves.  The efforts of this generation were essential in the decades that followed as the United States pulled away from the Soviet Union in their various Cold War competitions, and became the world’s sole superpower, a designation it still holds today.

This sense of national sacrifice for a greater common good has not completely disappeared from the American ethos, but it has faded significantly.  Elected leaders today might be adept at making promises—most of which they can’t or won’t keep—but rare is the politician who will ask Americans for something in return (other than campaign donations).  It makes sense, in a way.  A call for sacrifice doesn’t win elections, so campaigns stopped making them, and as a result, Americans grew unaccustomed to hearing them.

But as positive tests for the coronavirus continue to multiply by the day, a call for sacrifice from our elected leaders is exactly what we need, not only to protect ourselves as individuals, but to do what’s best for the collective whole.

The importance of this last part cannot be overstated. If what we think we know about the disease is true, then the coronavirus does not pose a grave health risk to the majority of Americans.  As a relatively young person in relatively good health, it seems that even if I were to contract the virus, I’d probably be fine.  It might leave me feeling pretty crummy for several days, but in all likelihood, I’d survive.

To be sure, our government has to help us out, too.  The economic losses that will be experienced due to this virus can only be mitigated by a massive government stimulus—bailout-style payments to big businesses, small businesses, and individuals that will help to prevent further economic crisis.  Still, government will not be able to do its part if we don’t first do ours.

It’s hard to know what the coming weeks might hold. The last few days have been the most tumultuous days since, for most of us, ever.  And while things may not be great for much of the immediate future, most Americans can take solace in the fact that, if not for their sacrifices, things would be even worse.

We are all literally in this together.  This disease does not target Democrats over Republicans or Muslims over Christians or Americans over any other human being on the other side of some arbitrary border.  It’s a crisis that reminds us of our common humanity.  It’s us versus it.

We need to move forward with that collective mentality—one that places the greater, national good over selfish comforts or desires. And if we’re able to make those sacrifices, for ourselves and for each other, just like generations of Americans before us, we’ll win.

One thought on “Sacrifice in the Time of Corona”